On the first visit, in October 2009,  after the team had completed the work at the hospital, they had the opportunity to visit some of the schools on the island.   It was not unusual for there to be seventy pupils in one class,  but they were all very keen to improve their education.  The four schools which were visited all had limited facilities and in some cases the floors were just earth.  There was no electricity or running water,  and the toilets were of the latrine type.  The children were sent back to their village at lunch time as no food was available at the school.  School uniform is compulsary, and although some were not in the best condition, they were proudly worn, and both the children and uniforms were very clean. 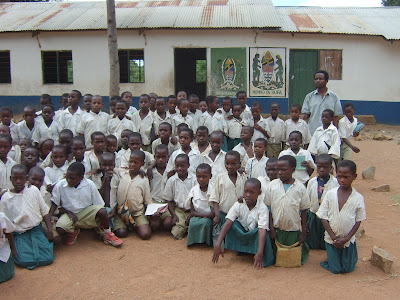 Painted on the outside of the classrooms, there are often 'times tables', world maps, and science subjects.    In all the schools visited this time, there were no sports facilities or equipment.  However, 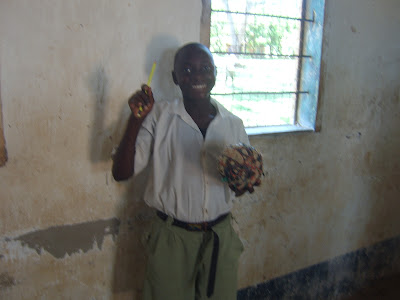 this young man had made a football by using screwed up plastic bags stuffed into a larger one - and  hey presto, his own football!  See the lovely smile on his face!﻿ ﻿We had taken with us plenty of pencils, and everyone was very happy to receive one.

It is quite usual to find three or four children sharing a desk designed for two and there was definitely of a lack of text books, reading books and science equipment, which we hoped to rectify in some of the schools, during our next visit.  But more about that later.

Until then, Best Wishes,